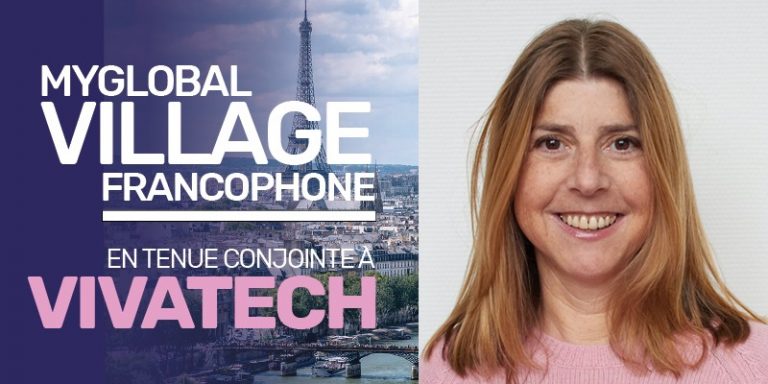 The fifth edition of VivaTechnology will take place from June 16 to 19 online, with a public day on June 18. It will also feature the Village Francophone. This platform allows French-speaking companies to showcase their tech solutions, especially in AI. Several themes will be addressed with pitches around innovations, round tables and a start-up competition. It is in this context that the Collectif sectoriel IA of ClusterIA will intervene.

ClusterIA is a central association to the Côte d’Azur ecosystem that was created during April 2018, a few weeks before the creation of 3IA Côte d’Azur. At present, it brings together 70 pure players from the Côte d’Azur who regularly take part in meet-ups that bring together researchers, start-ups and large groups to exchange ideas on AI technologies and work on Uses Cases, etc. Isabelle Galy, head of the French-speaking Village’s AI sector collective and coordinator of the ClusterIA, agreed to answer six questions to better understand the objectives of the French-speaking Village’s AI sector collective.

Actu IA: Can you explain the objectives of the Collectif sectoriel IA and the Village Francophone?

Isabelle Galy: The Francophone Village is a multi-sector collective around innovative technologies that aims to bring together all French-speaking territories. It is structured through a territorial approach while taking into account a technological point of view. Its ambition is not only to go to these major Tech fairs (CES Vegas, Hannover Messe, Web Summit), but also to participate in more specific events, such as the SophiA Summit, the World AI Cannes Festival, Nantes Digital Week, the European Forum of Territorial Artificial Intelligence, the International AI Forum of Marseille or the World Artificial Intelligence Conference in Shanghai. This allows the different French-speaking territories to exchange, promote together, create events…

Wallonia and Quebec, for example, are already very involved in this collective. But even in France, the need was felt. We do have 3IA initiatives with four 3IAs in Paris, Grenoble, Toulouse and on the Côte d’Azur, but this does not represent the entire French AI ecosystem. So the idea is already to get to know each other better, to forge links and to add our strengths in terms of AI. The whole French-speaking world is welcome in this initiative: Belgium, Luxembourg, Quebec, French-speaking or Francophile African and Asian countries… They are all interested in artificial intelligence, are aware of the stakes of a French-speaking AI and do not want to miss the technological gap.

Actu IA: What are the events not to be missed on June 16th? What can we expect on June 16?

Isabelle Galy: Vivatech is a multi-technology trade show that is more oriented towards start-ups/businesses/large groups. The event is intended to be the answer to the big American technology fairs. It is therefore an important French event in the tech world. That’s why the Collectif IA will be launched at this time, in the Francophone village.

The event will take place from the connected studio of the Zamansky Tower on the Sorbonne’s Jussieu campus and from the various connected studios in the territories.
For the occasion, we have brought together a dozen territories that are not necessarily in the area of influence of the 3IA: Wallonia, Quebec, Nantes, New Aquitaine, Occitania, the Great East, the North, Paris, Aix-Marseille for Provence, Monaco and the French Riviera. A round table that everyone can follow online will be organized with all these actors.

This meeting will allow us to discover these territories of excellence and their major themes in artificial intelligence. There will also be about fifteen AI solutions from start-ups coming from these territories that will be presented during a pitch session organized online by the Village Francophone. It should be noted that about thirty start-ups have applied. The fifteen start-ups that seemed to be the most representative of the AI momentum in French-speaking territories were selected and the three best solutions will be distinguished.

ActuIA: How was the event received in French-speaking territories? How is AI represented there?

Isabelle Galy: The collective was extremely well received. I expected that its constitution would be much more complex, that it would be difficult to find a contact, a person who would commit to the project, to find a jury for the competition, to find start-ups in connection with this ecosystem. Especially since the French-speaking village is not yet well known, but in the end, everyone was enthusiastic and it went very well.

This is due to the fact that there is a real lack of coordination between the ecosystems. Having a common objective facilitated the initiative, in this case, to make the French-speaking Tech better known to international and French-speaking players, to arrive “in force” in trade shows essentially dominated by Americans. But also to avoid that the potential French-speaking market is interested in foreign solutions when the French-speaking territories can do just as well.

If a company makes a call for tenders and does not have a good knowledge of the French-speaking ecosystem, it will easily be convinced by the big players in technology such as GAFAM. An example is the national education sector, where Microsoft is well positioned, whereas start-ups from our Edtech technology group could totally do the job. The double ambition is therefore to make them known, but also to allow buyers to realize the existing possibilities in the French-speaking ecosystem.

ActuIA: Do you think that the regional development in AI is the result of the creation of the 3IA?

Isabelle Galy: I think that in France, the development of AI is well beyond the borders of the 3IA. Even if it is obvious that where there is a 3IA, there is a real dynamic on the surrounding ecosystem. Indeed, they play a central role in building the research and training facilities necessary for the development of AI and strive to make them available to start-ups. However, the initiatives, events, and degrees labelled by a 3IA are very much focused on the basin around the institute in question.

Elsewhere, what irrigates the territories that do not have a 3IA are independent initiatives. These territories have managed to do things differently. Often by diverting former structures dedicated to digital. As a result, it is difficult to have a good knowledge of the different ecosystems. So by weaving links independently of this device, we will include more widely all the initiatives around AI and this is the meaning of this collective that we are launching.

ActuIA: Have you tried to find a balance on the number of start-ups per territory or on the tech fields that are represented in the collective?

Isabelle Galy: For start-ups, the idea was to balance the number according to regions to show the richness of these different ecosystems. However, the main selection criteria remain the technological maturity of the solution proposed by the start-up, the fact that AI is the core business of the start-up, and whether the solution is deliverable on a market. We therefore tried to keep start-ups from all territories.

It should be noted that all the territories were able to propose a significant number of start-ups, even if the Île-de-France and Quebec are richer ecosystems at this stage. To take the example of Quebec, there are start-ups that we will have to discard despite the fact that they are very interesting. But this will allow us to have a pool for other events and the start-ups that are not selected will be contacted at every opportunity.

ActuIA: After June 16th, what will be the objectives of the collective?

Isabelle Galy: The objective after the event will be to solicit even more French-speaking territories, all those that are not yet part of the collective. It will also be interesting for us to identify a few trade fairs where we can bring a maximum number of people. And of course to promote the fairs of each of the territories represented in the collective, which are certainly less known, but more sector-based. The final objective is that all together, we are strong enough to fight against the English-speaking domination of AI.