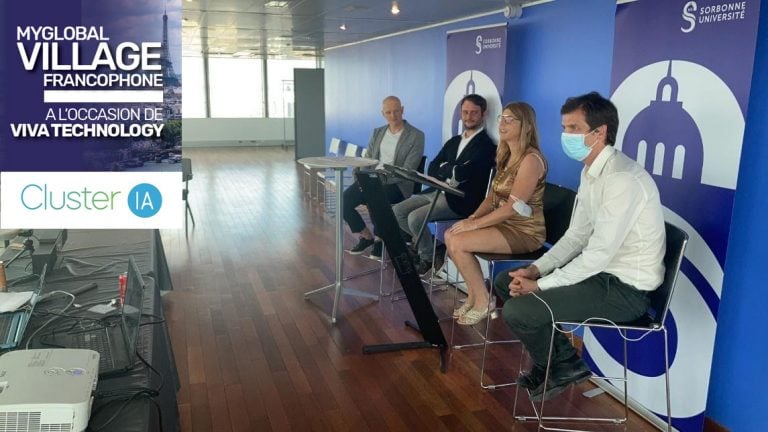 The Village Francophone, a driving force behind the federation of French-speaking delegations at national and international events, launched its AI collective on Tuesday 16/06 at VivaTech. Led by Isabelle Galy, the coordinator of ClusterIA (the association of companies and players linked to the 3IA Côte d’Azur), the IA collective took up the challenge of bringing together 13 territories for its first edition, 9 of which came to “pitch” their ecosystem .

For Isabelle Galy, “The initiative has been extremely well received. There is a real need for coordination between the ecosystems. This will enable us to arrive “in force” at trade fairs that are essentially dominated by Americans.

Some of the speakers were in the Paris studio, others in the regions, such as at the Village By CA in Sophia Antipolis for the Côte d’Azur, and others from their office or home.

In Ile de France, Xavier Fresquet from the Sorbonne Center of Artificial Intelligence welcomed them in the Parisian connected studio. Caroline Chopinaud from the Hub France IA presented their initiative of a European map of AI startups and associated matchmaking, as well as the Pack IA supported by the Ile de France region.

Philippe Servetti, Managing Director of Team Côte d’Azur, represented the Côte d’Azur, a region that is particularly rich in AI thanks to the establishment of a 3IA but also thanks to the wealth of a strong technological ecosystem born with the Sophia Antipolis technology park and supported by the Nice Côte d’Azur smart city. These strengths are concentrated on the themes of Health, Mobility and intelligent territories, Perfumes and cultural industries.

Vincent Richet from La Coque, the Aix-Marseille innovation center, spoke from their studio representing Provence, with Aix-Marseille University as a research player with numerous chairs in AI. It is a rich ecosystem of innovation with notably the Medinsoft cluster, it benefits from a strong support of the Metropolis and the Region. It is developing on the themes of Health, Industry 4.0, ICC, IOT, TechforGood, Cybersecurity and Blue Economy.

Antoine Hublet of the Digital Agency, in charge of the Walloon strategy in artificial intelligence named DigitalWallonia4.ia and Benoît Macq, UCLouvain and co-ordinator of TRAIL, the university and research consortium of Walloon universities in AI also highlighted the assets of their territory and the international cooperation already launched, in particular with Saclay and Quebec.

Marie-Paule Jeansonne, CEO of the IA Quebec Forum, presented the very dynamic Quebec ecosystem that is very welcoming for startups. The IA Quebec Forum mobilizes all the Quebec actors of AI, such as OBVIA, Mila, CEIMIA, IVADO or ScaleAI to make it a lever for the economic and social development of Quebec.

Clément Guillon, VP Naonedia presented the ecosystem of Nantes gathered around an ethical, citizen and responsible AI. Naonedia proposes experiments (health, citizen service, art…) and awareness actions. It should be noted that Nantes Métropole has drawn up a metropolitan data charter which sets out rigorous and ethical principles to protect citizens and to provide a framework for the use of data on the territory. The city of Montreal has also subscribed to this approach.

Alexis Steiner, Grand E-nov presented the ecosystem of the Grand-East and the place of AI in the great recovery plan of the region. The idea is to boost the 250+ researchers, 100+ suppliers and 150+ user companies working on this technology. Several colleges are specialized in AI as well as two campuses of trades and qualifications with a label of excellence. By 2022, AI will be part of the region’s eDIH.

Hauts de France, Moselle, Nord and Luxembourg could not join the launch session but are also associated with the initiative.

Isabelle Galy “We need to federate because the stakes are immense: auditability and certification will become a prerequisite due to the draft European regulation on AI, making AI less data-intensive due to the environmental impact and finally developing distributed AI technologies will be more and more sought after to avoid latency effects”

2nd YZR : YZR which allows to automate the interoperability of data between heterogeneous sources thanks to AI.

3rd Peeve :Artificial intelligence applied to the enterprise, which IT support tomorrow?

4th Prologue AI:VoiceTrip, a platform designed to promote the discovery of entertainment content through immersive experiences at the intersection between video games and tourism.

Côte d’Azur start-ups High Wind (medical emergency calls pre-diagnosed by Artificial Intelligence) and Nodeus Solution (KoKoon’s solution for monitoring activity and analyzing behavior to prevent and protect isolated people) did not make it to the podium, but still caught the eye of the jury and some decision-makers.

The Quebec startup Prologue Ai has already been invited to participate in the Village Francophone session of the Cultural and Creative Industries (ICC) collective during the Cannes Festival in July.

Isabelle Galy: “AI is now a mature technology, we have passed the stage of experimentation but AI remains a sum of technologies, each of our startups in each of our ecosystems has a piece of it, linking them allows us to be able to address almost entirely French-speaking solutions and pool use cases and markets.”

Building on this momentum, the collective will continue to expand to all French-speaking and Francophile territories!