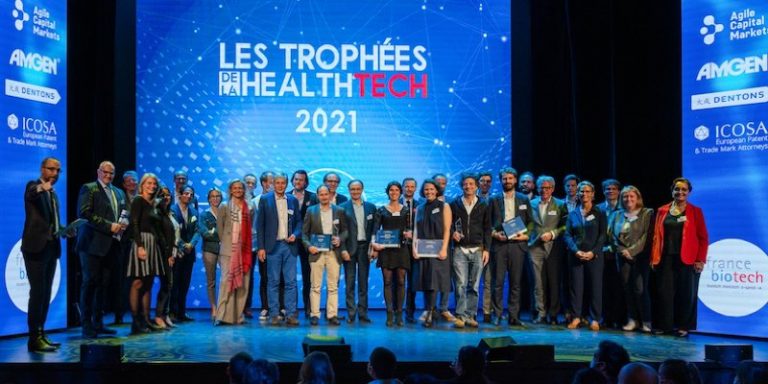 France Biotech, an association of health innovation entrepreneurs, unveiled the 7 companies awarded this year at the HealthTech 2021 awards ceremony held at the Eiffel Tower theatre. More than a hundred companies had applied, demonstrating the dynamism, expertise and scientific and technological excellence of the French HealthTech ecosystem.

Aqemia: Winner of the E-health Trophy

The E-health Trophy was awarded to Aqemia and presented to its President and co-founder, Maximilien Levesque, by Antoine Tesnière, Director of PariSanté Campus and Stéphane Tholander, Coordinator of the E-health Commission of France Biotech and President of Cibiltech.

The Medical Diagnostics Trophy was awarded to OncoDiag (Normandy) and presented to its Chairman and CEO, Claude Hennion, by Émilie Royère, General Manager of Eurobiomed, representative of the Health Competitiveness Clusters Network and Claire Verschelde, Co-Founder of ICOSA

The Biotech Trophy was awarded to Alderaan Biotechnology (Ile-de-France) and presented to its Chairman, Arnaud Foussat, by Marc Le Bozec, Head of Private Equity at the Arbevel fund and Gérard Friedlander, General Delegate of the University of Paris Foundation.

The Medtech Trophy was awarded to CorWave (Ile-de-France) and presented to its CEO, Louis de Lillers, by Guirec Le Lous, President of Medtech in France and President of Urgo Médical and Bernard Kirsch, President of Angels Santé.

The Coup de Coeur Trophy was awarded to Robeauté and presented to its two directors, Bertrand Duplat (CEO) and Joana Cartocci (COO), by Frédéric Collet, President of the LEEM and Philippe Lamoureux, Director General of the LEEM.