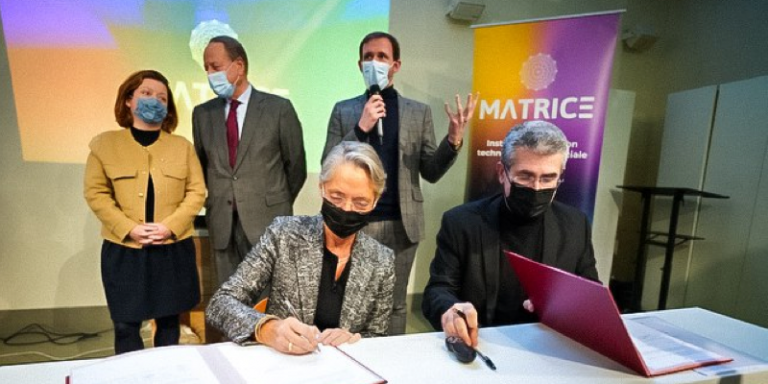 On November 19, Elisabeth Borne, Minister of Labour, Employment and Integration, visited the Matrice innovation institute to sign an agreement with Bruno Sportisse of Inria to create a laboratory dedicated to artificial intelligence. Called LaborIA and operated by Matrice, this resource and experimentation centre will have the mission of “better understanding artificial intelligence and its effects on work, employment, skills and social dialogue in order to develop business practices and public action”.

According to the OECD’s 2019 Employment Outlook report, medium-skilled jobs are increasingly exposed to profound transformations. Over the next 15 to 20 years, the development of automation could lead to the disappearance of 14% of current jobs, and another 32% are likely to be profoundly transformed.

The report states that the future of work is in our hands and will depend, to a large extent, on the public policy choices countries make. It is the nature of these policies, and our ability to harness the potential of unprecedented digital and technological change while addressing the challenges it poses, that will determine our success or failure

It is in this context that the Ministry of Labour, Employment and Integration and Inria have joined forces to create a resource and experimentation centre on artificial intelligence in the workplace, with the aim of supporting these transformations and preparing companies and employees for them.

LaborIA should enable a better understanding of artificial intelligence and its impact on work, employment, skills and social dialogue, with the aim of changing business practices and public action.

“The transformations that our society is undergoing, such as the digital and ecological transitions, have an impact that can be observed concretely in our daily lives. The world of work is no exception and this will increase in the coming years with the rise of artificial intelligence, for example. It will profoundly change the way we produce, recruit and even organise social dialogue. Today we are launching this unprecedented research programme, in partnership with Inria and the Matrice Institute, to grasp these changes and prepare companies and workers for them as well as possible.”

An initiative in line with the PMIA

This move follows the second PMIA (the Global Partnership for AI or GPAI in English) summit held in Paris on November 11 and 12, 2021. The PMIA is the culmination of an idea developed within the G7, under the Canadian and French presidencies. It was launched in 2020 by 15 founding member states.

This initiative aims to bridge the gap between theory and practice on AI by supporting cutting-edge research and applied activities on AI-related priorities. At this latest summit, international AI experts from civil society, academia, industry and government, including ministerial delegates from PMIA members, gathered. They presented the results of their group work and exchanged views on the responsible development of AI.

One of the working groups is dedicated to the theme: Future of Work. It is affiliated with the PMIA Expertise Centre in Paris, hosted by INRIA. Among other things, it conducts analyses on how AI affects and will affect workers and their environment. The creation of LaborIA responds to the recommendations of the Future of Work Group and is part of the National Strategy for AI

The LaborIA program must first consider the relationship of companies and public actors to artificial intelligence, and then, in a second phase, deploy concrete experiments, in the workplace, on various topics: working conditions, recruitment, evolution of skills, technological social dialogue, etc.

It also aims to create a forum for debate and exchange between all civil society players, social partners and public decision-makers. LaborIA is funded by the Ministry of Labour, Employment and Integration and operated by Matrice, a training and retraining centre for digital professions and entrepreneurship. Its work areas:

The challenges of AI on employment and skills

The development of artificial intelligence leads to the automation of a large number of tasks and will therefore change jobs and companies. This major technological transition could thus impact the majority of the working population and in particular the most fragile populations, concerned by jobs whose tasks could be automated. There is a digital divide in access to new technologies, which generates inequalities according to age, gender and socio-economic status.

In any case, AI should also lead to a new distribution of work between man and machine, generating new jobs and based on new skills. This complementarity between man and machine is, according to Cédric Villani, at the heart of the priorities. It would benefit from being developed around two objectives: to be sound (particularly with regard to ethical issues) and to allow human beings to develop their skills.

By mirroring the four criteria defining the automatizable nature of a task, it is possible to define the skills to be developed in order to move towards a complementarity between human and machine capabilities:

These transformations and their consequences must be anticipated.