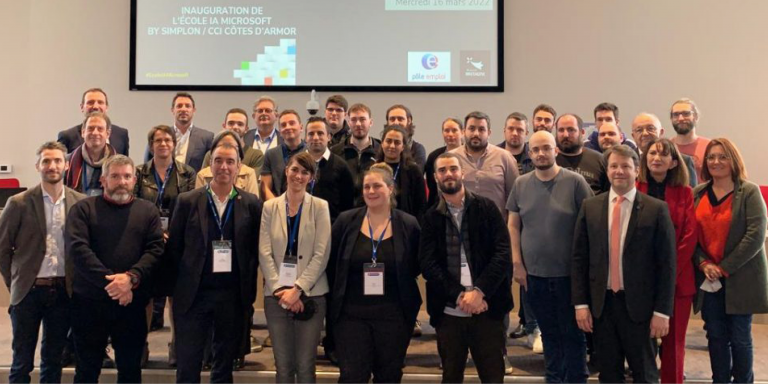 Microsoft promotes fair and inclusive AI. With this in mind, Microsoft created an alternative school in 2018 in partnership with the social and solidarity enterprise Simplon.co: the Microsoft By Simplon AI School. On March 16, Microsoft France and Simplon inaugurated their 34th school, operated by the CCI Côtes d’Armor, in Lannion. The project, supported by the Region and Pôle Emploi, brings together nine partner companies: Crédit Agricole Côtes d’Armor, Eco counter, Hoali, Labocea, Nokia, Orange, Saooti, SF2I, and Voxygen, and aims to “meet the need for new skills, with a desire for diversity and inclusion.

The CCI Formation Côtes d’Armor, in partnership with Simplon and Microsoft, has launched the Microsoft by Simplon AI School in Lannion in October 2021. After the cities of Brest and Rennes, Lannion is now hosting job seekers who are training to become artificial intelligence developers. Charles Calestroupat, Director of the Microsoft France Public Sector entity, states:

“The opening of this first Microsoft by Simplon AI School in Lannion, operated by the CCI Côtes d’Armor, we are pleased, alongside local actors, to invest for innovation and for inclusive employment in the digital. The companies involved represent sectors as diverse as banking, telecoms and research, contributing to the digital transformation of the region .

The work-study students began, in October 2021, an intensive seven-month training course at the CCI Côtes d’Armor branch in Lannion. Starting in April 2022, they will continue their work-study training in a company for 12 months, while keeping one week per month of training at the Microsoft by Simplon AI School.

Certifications that can be obtained:

Inscribing innovation within the Brittany region

To support the digital transformation of public and private organizations in the region, Microsoft has surrounded itself with an ecosystem of 10,500 partners, start-ups, associations and ISVs. It has thus benefited from the support of the main local players.

” For a long time artificial intelligence was a promise, a technological challenge. Today it is a reality, and there are many operational applications in the health sector (medical imaging, prevention, early diagnosis) and in industry. And we are only at the beginning. New jobs will appear tomorrow, just like the 200,000 jobs created in the digital sector over the next three years, all over France. These jobs must be accessible to as many people as possible, wherever they live. That’s why, in conjunction with the valuable expertise of Technopole Anticipa, I was keen to support and accompany the project to set up a Microsoft by Simplon AI school in Lannion from the outset. I am delighted that this project is now taking shape. Welcome to Microsoft and Simplon, good luck to all the future learners, and my best wishes for success to the companies in the Trégor region that are investing. “

” After Rennes and Brest, it is in Lannion that a new IA school opens. Training courses accessible without diploma requirements allowing women and men, regardless of their personal background, to access the professions of artificial intelligence. The Region is pleased to support this innovative action for more jobs with great jobs in a sector of the future in Brittany. “

An AI field accessible to all

The 18 students in this first class came from a wide variety of backgrounds. Pôle emploi relied on the Simulation Recruitment Method (SRM), which is based on the skills needed to hold a job and not on diplomas or experience as it usually does. Danièle Maillot, Director of Pôle Emploi Côtes d’Armor, states:

” Digital transformation is a key factor in competitiveness for a majority of companies in all sectors. Initially reserved for engineers and graduates with 5 years of higher education, many digital jobs are emerging and are now open to more profiles from various backgrounds. Pôle emploi’s role is to make the system known to jobseekers in order to meet the skills needs of companies. There is an ethical and responsible stake in developing the diversity of profiles that will create the services and applications of tomorrow. “

Today, 84.4% of AI School learners have found a positive outcome to their training, whether it is an open-ended contract, a fixed-term contract, a business creation project or a return to school. Convinced that the development of digital skills in companies is a major issue, Microsoft France continues to open its schools throughout the country to meet the needs of local companies. Since 2018, more than 700 learners have been trained through programs operated with Simplon.

The goal is to train nearly 1,000 learners by the end of 2022 to meet the job opportunities generated by artificial intelligence.