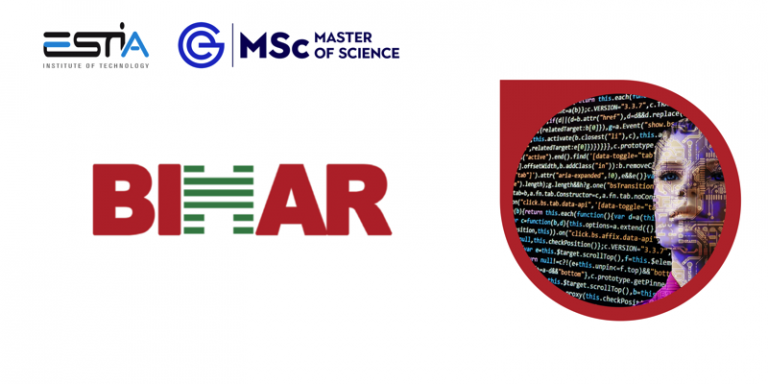 The École Supérieures des Technologies Industrielles Avancées (ESTIA) presented its Master of ScienceTM BIHAR and its online version eBIHAR. At the start of the 2020 academic year, these two Master of Science in Engineering and Science from DATA will be at the heart of ESTIA’s innovation laboratory on the uses of new technologies.

The ESTIA engineering school is a higher education and research establishment, created by the CCI Bayonne Pays Basque, in order to provide the Basque Country with a tool for competitiveness that generates talent and research programmes applicable to the territory’s companies. BIHAR and eBIHAR have been launched with several partners including Oracle University, France Université Numérique (FUN), the International e-Miage Consortium (and Open Miage, an ANR project in progress) and Datum Academy.

BIHAR (Big Data Intelligence for Human Augmented Reality) is a 2-year ESTIA Master of ScienceTM (MScTM) corresponding to 120 ECTS (European Credit Transfer System) with a large international academic network in support (in co-degree with the University of Siena in Italy).

BIHAR starts in October 2020 in Biarritz in the second year of the Master (60 ECTS) for holders of a Master 1 in computer science (or a Bachelor +4): 10 courses and a project/internship/industrial thesis are planned each year.

A BIHAR innovation laboratory on the uses of Big Data has been set up around structuring projects integrated into schooling (Deep Learning, Machine Learning, IOT, Blockchain, NFC, LIFI etc.). The language of instruction at BIHAR is mainly English. The first year of BIHAR in Master 1 will start in September 2021 with always the possibility to accept students with a Bac + 4 in Master 2. The approach of BIHAR is oriented towards initial training.

The registration fee for ESTIA’s MScTM BIHAR is 7,000 Euros per year. Registration is done on the ESTIA website www.estia.fr.

Excellence or industry scholarships are offered to the best students.

eBIHAR is the online version of the BIHAR Master and therefore also an MScTM. The eBIHAR approach (Masters and GRADEO) is oriented towards continuing education and includes 6 academic MOOCs on the FUN platform and 6 online courses from Oracle University. Certification is also 60 ECTS per year.

eBIHAR costs 6000 Euros HT (or 7 200 Euros TTC) and is proposed in English version from October 2020. The French version of eBIHAR will be offered in October 2021 in partnership with the Ecole Supérieure Africaine des TIC (ESATIC) in Côte d’Ivoire thanks to a contract from the Franco-Ivorian HUB.

In order to target certain jobs in tension, specialized courses from eBIHAR (or skill blocks) are offered in double certification (6 ECTS and Oracle certification) without academic prerequisites: FUN calls them GRADEO.

The first GRADEO from eBIHAR and proposed by Datum Academy is the GRADEO Big Data & Artificial Intelligence which costs 3900€ (including VAT) and is composed of 2 MOOC “Artificial Intelli- gence (Machine Learning and Deep Learning)” in partnership with the University of Siena and “Distributed Big Data Management” from ESTIA and a course from Oracle University “Big Data Fundamentals”.

The professionalizing formula of each MOOC, each GRADEO micro-accreditation and the eBIHAR Master’s degree offers learners the best of academic expertise combined with the professional expertise provided by Oracle.

Defined at the instigation of the European MOOC Consortium (EMC), a Common Microcredential Framework (CMF) is being deployed on European MOOC platforms: the GRADEO

The objective is twofold:

The GRADEO of the eBIHAR master is the first GRADEO launched on the FUN platform. Others will follow very soon.