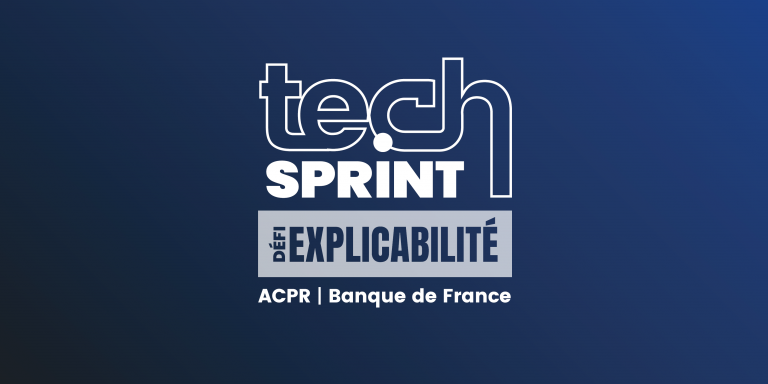 The Autorité de contrôle prudentiel et de résolution (ACPR), is interested in the challenges of using artificial intelligence in the financial sector and has launched the first Tech Sprint (hackathon), in June and July 2021. It focused on the explainability of artificial intelligence and, more concretely, the behavior of AI-based predictive credit risk models that are only accessible in “black box”.

The development of artificial intelligence has intensified in the financial sector in recent years. The introduction of ML algorithms aims, both through descriptive and predictive methods, to automate or improve the decision making
previously made by humans.

It was Christine Lagarde, Minister of Economy under President Nicolas Sarkozy, who announced the creation of the ACPR in July 2009, following the global financial crisis of 2008. The objective of this new authority is to supervise banks and insurances in order to guarantee their financial stability, protect customers and strengthen the French influence in international and European bodies. Created on March 9, 2010, and integrated into the Banque de France, the ACPR benefits from the human and IT resources provided by the latter for its operations. In 2016, the Fintech Innovation Cluster dedicated to Fintech and innovation was created.

Since 2018, the ACPR has engaged in work with fintechs, major groups, students, academics and consultants, with the aim of providing insights into the regulatory issues raised by AI in terms of risk control, governance and customer protection. In particular, the institution published the report “Governance of AI algorithms in the financial sector” in 2020, which highlighted the role of “explainability” as fundamental in the design and governance of algorithms.

The ACPR has entrusted its Fintech Innovation Cluster with the task of organizing a first Tech Sprint on the “explainability” of artificial intelligence, i.e., to the following two questions:

The question of explicability arises very concretely from the design of AI-based systems. In this hackathon, only the models accessible in black box were considered. Their inner workings are hidden from the observer, and only the input data (in this case, the credit application or the current credit) and the output data (for example, the predicted probability of default) are visible.

The goal: to have participants explain credit risk models

Hackathons in ML are quite often about the use cases of credit risk models. The Tech Sprint focused on consumer credit risk, which raises issues such as financial stability, household consumption, commercial issues and socio-economic questions. Bertrand Peyret, Deputy Secretary General of the ACPR and chairman of the jury, said:

“Working on a use case that is as close to reality as possible, since it was designed with input from credit institutions, makes the exercise particularly interesting. It allows us to demystify the issues surrounding AI, and to ensure that humans retain control over the tools they develop. This Tech Sprint gave us a concrete approach to the issues involved in using these technologies.”

How the Tech Sprint went

Four credit institutions (BPCE, Crédit Mutuel Arkéa, Société Générale and Younited Crédit) designed predictive models to identify consumer credit risk. In order to explain these models, twelve selected teams of analysts interrogated their “black boxes” by developing explanatory tools during a one-day hackathon, assisted by the Pôle Fintech team. Other activities were proposed in connection with the theme such as a presentation on the socio-cognitive factors at play in AI explanations that same day.
The next day, the teams presented their solutions to a jury composed of experts from the ACPR and the Banque de France. The presentations were limited to 5 minutes but their free format allowed each team to express its creativity: slides, interactive demo, or in the case of one team a theatrical performance of the explanations produced by their method.

The Tech Sprint was an opportunity to bring together the actors of the innovative ecosystem, who thus worked in network, under the aegis of the ACPR. Olivier Fliche, Director of the ACPR’s Fintech Innovation Unit explains:

“It was important for us to mobilize the Marketplace on these key issues for the future of financial services. And the expressions of interest were there, with twice as many requests for registration as places available!”

The work presented at the end of the Tech Sprint was praised for its quality: it illustrates the real French know-how in data science. Among them, the jury rewarded the solutions proposed by the Quantmetry-Stellantis, Zelros and BourbakIA teams (a team gathering data scientists from several companies).

The ACPR published a report at the beginning of January 2022 that can be downloaded from its website.