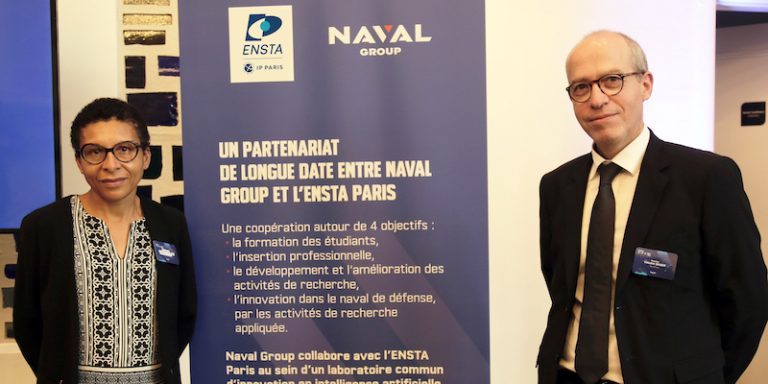 The joint laboratory on systems engineering and artificial intelligence (LC2IA), created in 2017 by ENSTA Paris and Naval Group, has been renewed. The announcement was made during the Naval innovation Days. The theme of advanced numerical methods will now also be integrated into the research work. This laboratory aims to determine solutions to create a ship of the future that would be more intelligent, automated and interconnected.

Since September 2017, Naval Group teams and ENSTA Paris research laboratories have been working jointly on the theme of the digital ship.

A central theme: the ship of the future

Their research focuses on the major issues of technological differentiation and therefore obviously on artificial intelligence, systems engineering and information control and decision support. The ship of the future is a strong subject that poses many challenges, particularly in terms of anticipating risks and dangerous situations, planning trajectories or analyzing behavior and decision support in theaters of operation.

Taking advantage of the Naval Innovations Days, ENSTA Paris and Naval Group announced the renewal of the agreement around the LC2IA as well as the extension of its perimeter to advanced numerical methods and the possibility of extending joint actions to the perimeter of the Institut Polytechnique de Paris with the future Interdisciplinary Centre for Defence and Security Studies.

The two partners also presented five research topics to address new challenges in their areas of collaboration: AI, advanced digital methods, waves and vibrations. Since 2017, several research works have been carried out in the laboratory and are still ongoing.

The themes of trust AI, acoustic surveillance, autonomous navigation but also platform control and underwater networks will be at the heart of the LC2IA’s actions. Note that the laboratory will also have working groups and a roadmap of the most relevant actions in the fields of AI and augmented engineering by AI and digital.