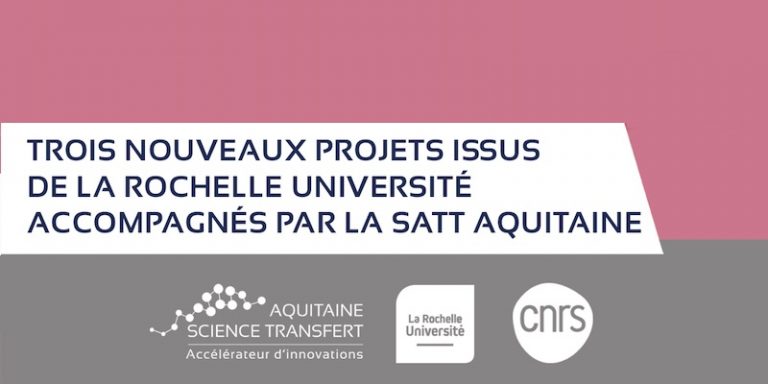 At the Investment Committee meeting on 15 May, SATT Aquitaine Science Transfert indicated that three projects, PCD MIbac, ARCADE and DOMINOES, would be supported through an investment of 304,470 euros.

The technico-economic maturation that has begun will make it possible to finalise the inventions of the researchers in the form of a pre-industrial proof of concept and to transform each of them into an innovation that creates jobs and economic value.

These 3 projects come from the Fast Track Innovation call for projects launched in December 2019 by SATT Aquitaine Science Transfert. They are :

Led by Anas Sakout of the Laboratory of Engineering Sciences for the Environment (LaSIE – La Rochelle University, CNRS), this project obtained funding of 103,250 euros over 12 months to develop prototypes of miniature, robust and low-cost flow sensors, optimising the performance of current ventilation devices and enabling predictive remote maintenance of airflow systems.

Led by Jérôme Lux from LaSIE (La Rochelle University, CNRS), this project obtained funding of 106,760 euros over 12 months for the development of a prototype for the characterization of recycled aggregates from the construction industry using Artificial Intelligence, paving the way for the development of high-performance, high value-added road materials such as recycled concrete.

Led by Romain Chevrot from Littoral Environnement et Sociétés (LIENSs – La Rochelle University, CNRS), this project has obtained funding of 94,460 euros over 12 months for the development of new enzymes for the biosynthesis of innovative peptides in the field of antibiotic resistance treatment.

The objective of the SATT Aquitaine Science Transfer is to mature projects from technological research to pre-industrialisation and to accompany them up to the meeting with companies to bring the inventions to the market.