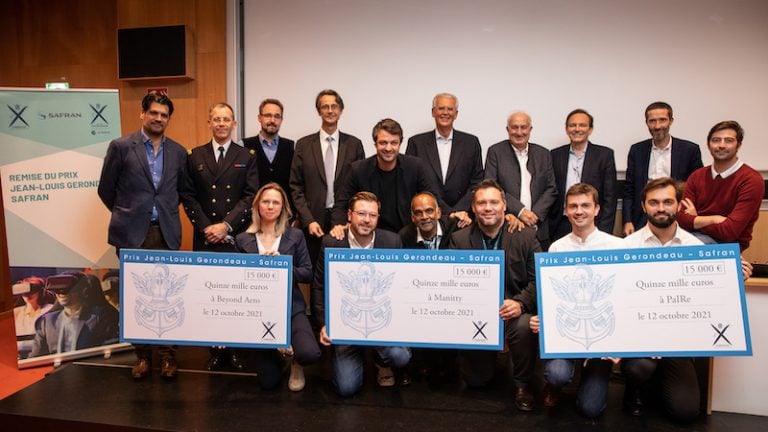 Manitty, PaIRe and Beyond Aero are the winning startups in the Jean-Louis Gerondeau – Safran 2021 prize. Their innovations in the fields of aeronautics, biotechnology and nuclear medicine impressed the jury, and the startups will each receive 15,000 euros.

The Gerondeau – Safran prize was launched in memory of Jean-Louis Gerondeau (X 1962). It aims to support innovation and entrepreneurship at X, by encouraging the emergence or maturation of innovative projects, particularly in fields with high technological content, led by teams from the entrepreneurial ecosystem of the École Polytechnique and now the Institut Polytechnique de Paris.

Manitty: an all-in-one device for monitoring physical and cerebral status

With Manitty, Paul-Antoine Libourel, a neuroscience researcher at the CNRS, Philippe Blasquez and Pascal Garcin, both students in the Executive Master’s program at the École Polytechnique, are developing an all-in-one solution for monitoring physical and cerebral status. Composed of miniature and portable sensors, connected to an artificial intelligence platform, it revolutionizes the monitoring and understanding of the body by collecting and correlating numerous physiological and cerebral data.

“Manitty is primarily targeting the veterinary market. For example, our device can be used to analyze the sleep of animals or to evaluate the anesthesia index and the state of pain after an operation. To date, we have developed a functional prototype and established partnerships with industrialists that allow us to test it in professional conditions and optimize our AI. We plan to launch the commercialization in Europe within 18 months”, says Philippe Blasquez.

The applications of Manitty’s solution are not limited to the veterinary market and could eventually concern humans: ambulatory medicine, home medical monitoring, monitoring for consumer electronics or even for defense.

“We are very proud to be among the winners of this award. It is a great recognition from the X entrepreneurial ecosystem. The financial endowment that accompanies it will allow us to create our company with a larger share capital and thus generate a leverage effect for our project”, Philippe Blasquez is delighted.

PaIRe: a solution to aid diagnosis in nuclear medicine

While the number of nuclear physicians is stable, but there are more and more PET scans to be interpreted, PaIRe is developing a diagnostic assistance algorithm to assist physicians in their decision-making. Currently deployed in beta-testing on 11 PET scans in 6 centres, it automatically detects and segments tumours, allowing the main quantitative parameters to be extracted.

“Our solution is highly sensitive, detecting 97 lesions out of 100, and provides doctors with an enhanced examination that helps them interpret the PET scan results. It therefore saves time, increases confidence in the diagnosis and reduces measurement variability and errors,” explains Paul Blanc-Durand.

“Winning the Jean-Louis Gerondeau – Safran award is particularly encouraging. In concrete terms, this prize enabled us to finalize the industrialization phase and move from an algorithm to a complete solution that has been on the market since September 2021,” adds Pierre Saudin.

Beyond Aero: towards a light, silent and sustainable business aircraft

“We want to build planes that can accommodate 5 to 7 passengers, silent and sustainable thanks to hydrogen. We have completed our first fundraising round, which will enable us to finance our human-scale demonstrator and to expand our team. The next step is to fly a two-seater aircraft and continue the development of our technology,” explains Eloa Guillotin.

Beyond Aero has been selected to join the Blast program run by Starbust, the world’s leading accelerator of start-ups in the aeronautics, space and defence sectors, and the French aerospace research centre (ONERA).

“We are very honored to receive the Jean-Louis Gerondeau – Safran award and we would like to thank the jury for the trust they have placed in us. This prize is a first stone that will enable us to build the rest of the cathedral in a more serene manner,” adds Eloa Guillotin.

As is the case every year, the innovative nature of each project’s proposed product/service, its economic potential and its ability to lead to the creation of a company were evaluated. The Gerondeau – Safran prize is endowed with 45,000 euros, divided among a maximum of three projects.

“The end of the Covid-19 crisis is giving rise to an acceleration of major transformations: decarbonization of the economy, digital transition and strengthening of sovereignty issues. These major themes represent Safran’s strategic priorities today, and are fertile ground for innovation. The winners of the 11th edition of the Jean-Louis Gerondeau prize are a testament to the ability of entrepreneurs to anticipate and support these transformations.