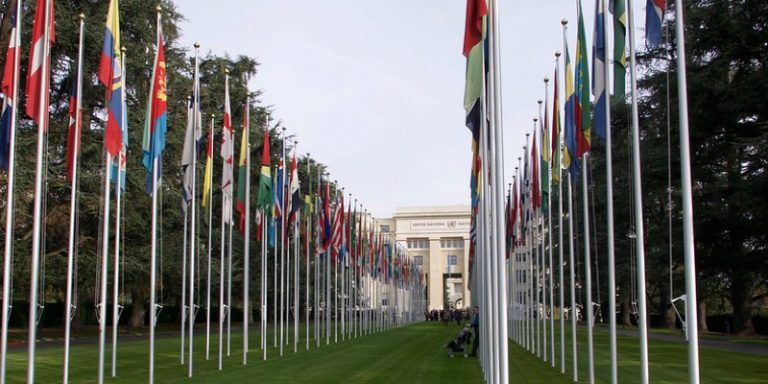 Solving complex problems in diplomacy with the help of quantitative methods and new technologies? This is the idea behind the newly launched Science Diplomacy Laboratory (SiDLab) at the University of Geneva (UNIGE) and ETH Zurich in Geneva. This interdisciplinary centre for science diplomacy will develop and use the tools and methods of science to respond effectively to the societal challenges of the 21st century.

UNIGE and ETH Zurich announced on 8 October the creation of the Science Diplomacy Laboratory (SiDLab). The aim of this partnership for the launch of this new centre is to respond to global, political, climate and health challenges and to improve governance by relying both on science, which can provide effective tools, and on diplomacy, which is capable of stimulating research, particularly when common political objectives are set.

Machine learning at the heart of this new laboratory

Initiated in 2019 by Micheline Calmy-Rey, then visiting professor at GSI, and Michael Ambühl, professor of negotiation and conflict management at ETH Zurich, this joint project can also count on collaboration with the Geneva Science and Diplomacy (GESDA).

The SiDLab is based on the joint contributions of the ETH Zurich Chair in Negotiation Engineering, the Scientific Approach to Negotiation and Conflict Analysis, and the UNIGE Chair in Computational Diplomacy. The latter, developed by the Global Studies Institute (GSI) and the Department of Computer Science of the UNIGE Faculty of Sciences, will bring together two complementary profiles: in data science with a specialization in machine learning and in data categorization in connection with complexity theories and global studies.

At the heart of the SiDLab, we find computational diplomacy, presented as an effective tool to improve the understanding of global issues through the use of new algorithms but also through the development of a new theoretical framework of international relations and the use of significant computing power to develop scenarios. Michael Ambühl indicates that “thanks to quantitative methods such as mathematical optimization, game theory and statistics, negotiation engineering will help solve complex problems. Mathematical language can increase the logic of negotiations and defuse underlying emotional conflicts.

In a context where the security and veracity of information is increasingly under scrutiny, “Artificial intelligence and machine learning can be used first and foremost to check the integrity of data and detect fake news that is now easily created thanks to modern technologies. It is indeed essential that a diplomatic process be based on validated information” as Bastien Chopard, Director of the Department of Computer Science at the Faculty of Science of the UNIGE, explains.

The SiDLab, based in Switzerland, will also strengthen the country’s image as a centre of scientific excellence and reinforce that of Geneva, at the heart of multilateralism. Yves Flückiger, Rector of UNIGE, said:

“Our academic expertise strengthens international Geneva. We are providing new tools for international governance that will enable the emergence of a multilateralism 2.0”.

“The creation of this laboratory contributes to Switzerland’s reputation for scientific excellence and strengthens its position on the international multilateral scene”.

Science diplomacy, based on negotiation engineering and computational diplomacy, is one of the main emerging topics identified in GESDA’s Science Breakthrough Radar,” said Peter Brabeck-Letmathe, President of GESDA. This is why we are proud to join forces with ETH Zurich and the University of Geneva to set up their joint laboratory for science diplomacy”.

With this new laboratory, the Swiss partners hope to be able to provide solutions to the challenges facing societies, whether in terms of health, society or climate. It is also perhaps a question of rethinking the current conception of multilateralism, as Nicolas Levrat, director of the GSI, points out:

“We note that the current theories according to which academics model and analyse the behaviour of actors no longer correspond to reality, particularly on the perception of the sovereign state defending its interests.”

And in this sense, academic research in the field of diplomacy could open the way to new models, to new innovative tools accessible to diplomats and other international actors to improve negotiation processes and the collaborative solutions that result from them.