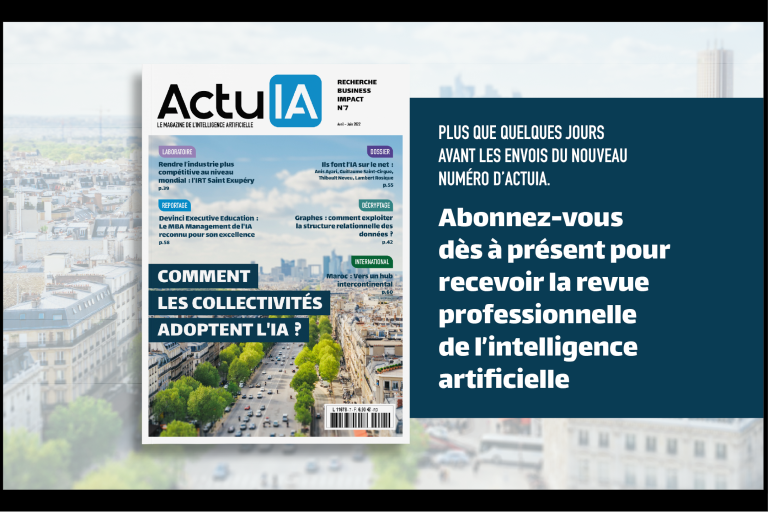 Only a few days left before the release of the new issue of ActuIA, the magazine of artificial intelligence. An issue not to be missed! So subscribers, watch your mailbox and, if you are not a subscriber, don’t hesitate and subscribe today! In this issue, you will find articles on the use of AI in communities, on the five-year perspectives of AI in industry and cybersecurity, as well as on AI patents and the rise of AI in Morocco.

ActuIA magazine is already 7 issues old and we are pleased to count new subscribers and new readers! For this issue 7, our central feature is about local authorities: where are they in 2022 in terms of AI adoption and experimentation? How are elected officials approaching the opportunities, what are the obstacles, and how can AI help territorial agents in their jobs?

We are also interested inAI and music in a file brilliantly orchestrated by Francis Rousseaux, in graphs, with a view to successfully representing knowledge, but also in patents in a quest for the origins of creations as well as in the prospects for the next five years in two key sectors:industry and cybersecurity.

We took the opportunity of this issue to celebrate the 50th anniversary of Prolog and to visit theIRT Saint Exupéry to learn more about its activities, especially the DEEL project.

Our international focus is devoted to Morocco, the country of the distant sunset, which is mobilizing to make AI a central objective and position itself as an intercontinental hub with, in particular, Ai movement, the international artificial intelligence center in Morocco led by Amal El Fallah Seghrouchni and the Mohammed VI Polytechnic University.

This spring issue of ActuIA also aims to highlight the dynamism of the ecosystem by offering you the opportunity to discover the tribunes, including Redha Moulla on the job of data scientist and Adrien Basdevant onArt, and the portraits of many experts, including four people to follow (if not already the case): Guillaume Saint-Cirgue, Anis Ayari, Lambert Rosique and Thibaut Neveu who ” make AI on the Net.

And many other articles for a new and very complete issue that we hope will delight you!