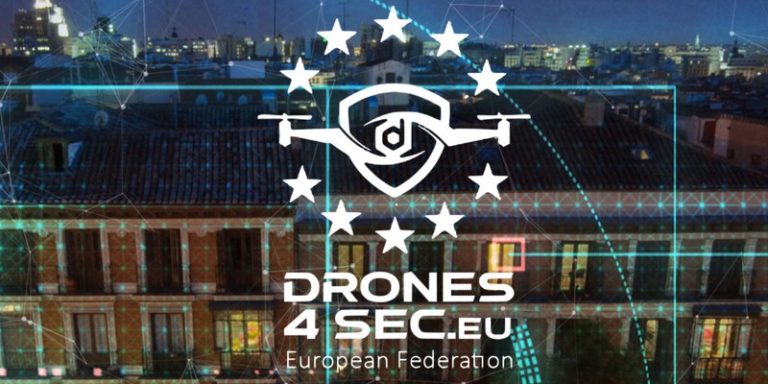 This 22 June 2021 sees the official launch of the European Federation – Action Tank – DRONES4SEC. This European action tank aims to bring out innovations and experiments throughout Europe with the support of the European Union. Seven members are at the origin of the project, which also aims to strengthen the link and the existing cooperation between European actors specialized in security drones.

DRONES4SEC is a European federation designed to bring together players specialising in land, sea and airborne civil security drones. All the actions they will implement will aim at developing experiments and innovations in European territories and strengthening cooperation between these actors.

This initiative will put forward frameworks of use which will respect the European requirements with the will to contribute to build and to perfect the European regulations around the subject of the drones. DRONES4SEC states:

“At a time when the use of drones is becoming more and more part of the daily life of companies and authorities, the creation of a sovereign, representative and expert federation reinforces the growth of this innovative industry, bringing together European technology companies with high potential.”

The challenges of the European federation DRONES4SEC

The federation wishes to define the criteria of trust, cybersecurity and personal data protection that the use of drones requires in order to, in particular, help decision-makers to grasp the important issues involved in choosing trusted drones. The European action tank specifies that these issues are becoming all the more important with the increase in connectivity, with the increasingly autonomous operation of drones and with their increasingly technical use to respond to increasingly sensitive missions.

To achieve this, DRONES4SEC has teamed up with Thierry Berthier, head of the “Artificial Intelligence Security” group at Hub France IA, who has agreed to act as scientific advisor to the European federation. In addition, Zenon7, a company specialised in European affairs and economic diplomacy, will provide the general secretariat of DRONES4SEC.

Several industrial and technological actors specialized in security UAVs have decided to create this European federation DRONES4SEC. It brings together drone manufacturers, operators of data from drones and suppliers of software solutions enabling their operation and deployment. We find:

In addition, Hoverseen has subsequently joined DRONES4SEC as part of the first working colleges already created by the European action tank. The specialist of automatic camera drones is piloting the automatic flight college while the company Icarus Swarms is piloting another one.

To conclude, DRONE4SEC specifies the context of its creation:

“At a time when the use of drones is becoming more and more part of the daily life of companies and authorities, the creation of a sovereign, representative and expert federation reinforces the growth of this innovative industry, bringing together European technology companies with high potential.”