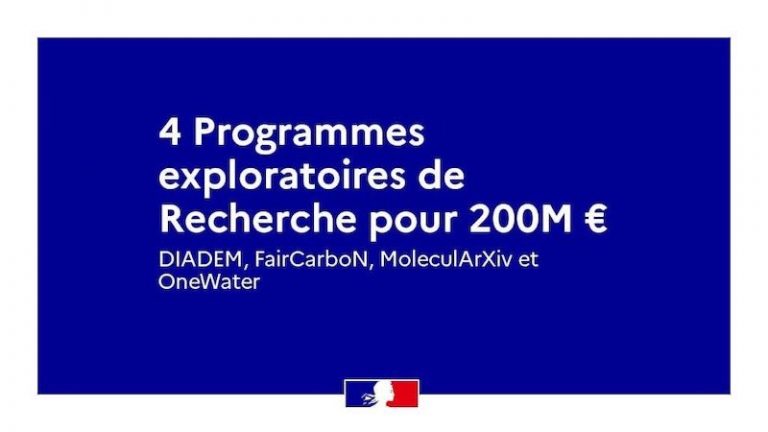 The first Priority Research Programs and Equipment (PEPR) were unveiled a few days ago. Selected in the first wave of the call for projects on exploratory PEPR created by the fourth program of investments for the future (PIA4), these 4 projects, for a total amount of 200 M€, are about the materials of tomorrow, water, the carbon cycle and data storage on DNA. They will be led by the CNRS or co-lead with its partners and a second call for proposals has already been announced.

The PIA4, presented at the beginning of 2021 and endowed with a budget of 20 billion euros over 5 years, sets up several devices to support French research and innovation, including the PEPR. The latter are dedicated to the structuring of research communities and initial scientific advances. In addition to the 10 PEPRs of the national strategies, several waves of exploratory PEPRs are planned with an overall budget of one billion euros. These PEPRs target emerging scientific or technological sectors for which the State wishes to identify and structure communities in anticipation of possible future national strategies. All led or co-lead by the CNRS, the four projects selected by an international jury in the first wave cover a variety of fields, with budgets ranging from €20M to €80M.

The materials of tomorrow

The Diademe project, which stands for “Integrated devices for accelerating the deployment of emerging materials”, aims to develop innovative, high-performance, sustainable materials from non-critical and non-toxic raw materials. This will be achieved rapidly thanks to four platforms – for the synthesis, characterization and digital simulation of materials, as well as for the storage, management and exploitation of databases by AI – integrated into dedicated competence centers. This PEPR is co-directed by CEA and CNRS, in partnership with Université Paris-Saclay, Sorbonne University, Institut Polytechnique de Paris, Université Grenoble-Alpes, Université de Lorraine, Université de Bordeaux, Université de Lyon.

The exploratory PEPR FairCarbon project focuses on the carbon cycle in order to identify ecological, agronomic and socio-economic levers and trajectory scenarios for achieving carbon neutrality and restoring natural resources in continental ecosystems. Led by CNRS and Inrae, in partnership with IRD, CIRAD, CEA, the University of Paris-Saclay, Aix-Marseille University and the University of Montpellier, it also intends to support the implementation of these scenarios at local and national levels, while making available to the scientific community digital models validated on open data sets.

The third PEPR selected is led by the CNRS, in partnership with Inria, the University of Strasbourg, the University of Paris Sciences et Lettres and the University of Côte d’Azur: MoleculArXiv aims to store massive data on DNA and artificial polymers. It aims to position the French academic (computer science, chemistry, biology, nanotechnology, microfluidics) and industrial research ecosystem as a key player in polymer (DNA and non-DNA) storage on an international scale.

Finally, the OneWater programme, which focuses on water as a “common good”, is organised into major scientific and technical challenges, from anticipating changes in water resources to enable adaptation, to the transition to a new governance of resources for a sustainable and resilient society, including water as a sentinel of the health of the environment and human societies. It is co-directed by CNRS, BRGM and Inrae, with the participation of Ifremer, IRD, Météo France, University of Bordeaux, University Claude Bernard Lyon 1, University of Montpellier, University of Grenoble-Alpes, University of Rennes 1, University of Strasbourg, University of Toulouse Midi-Pyrénées.

A second wave of this exploratory PEPR call has just been launched, with results expected by the end of April 2022. The Ministry of Higher Education, Research and Innovation hopes to launch about twenty exploratory PEPRs in the first three years of PIA 4, each with a financial support of about €50M.