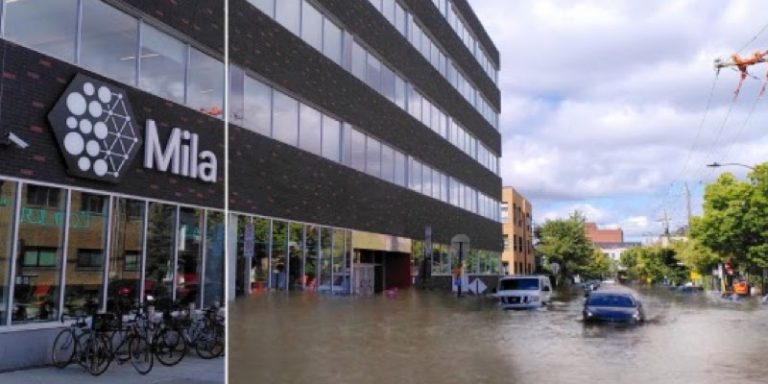 In recent years, natural disasters seem to increase and follow one another at an exponential rate. Whether it is the devastating fires in California, Australia or Canada last summer, which resulted in an episode of intense smog, or the torrential rains that fell in Belgium several months ago, in India ten days ago or in Sicily last Tuesday, extreme climatic phenomena follow one another but do not really seem to concern the population, which considers itself safe from such tragedies.

The fight against global warming responsible for these disasters (waste sorting, public transport, electric cars, solar panels….) must be done according to experts on a political and individual scale, but many do not do it, perhaps not really understanding the reality of this climate change and its consequences, some going so far as to refute it.

A simulation to inform and alert

To make people aware of the impact of a natural disaster, the Quebec Institute of Artificial Intelligence Mila launched last week the website “This climate does not exist”. Sasha Luccioni, an artificial intelligence researcher and director of the initiative, said:

“People still see climate change as something far away. We want to help people put themselves in the shoes of someone experiencing an extreme weather event.”

The “This Climate Doesn’t Exist” website will allow people to experience an extreme climate situation in a close environment “to create climate empathy”.

The user chooses a familiar place (his home, his office, his children’s school, etc.). The only condition is that it is listed in Google Street View. This location can then be visualized during a flood, in the middle of a fire or a heavy smog. According to Sasha Luccioni:

“These are the extreme weather events that affect the most people across the planet”.

The site is not just about this simulation, it informs about the climate emergency, invites individual and collective actions and to share the effects of climate change with the public.

One may think this simulation easy to perform by taking an image from Google Maps and applying a filter with orange colors, with water or even fog but according to Sasha Luccioni:

“the AI was muchmore complex than expected to develop. We thought we would be able to select images ourselves. But as soon as someone chooses a different angle, we have to take that into account.

“With the AI, we analyse the scene, the perspective, the road. We’re projecting the water on there, for example. So it’s not just drawing flat, horizontal water, it’s contextual based on the elements that make up the image.”

Mila’s team has thus managed to develop an algorithm that proves that artificial intelligence is a tool for environmental awareness, a project that Yoshua Bengio has had at heart for 3 years. Sasha Luccioni presided, referring to generative adversarial networks:

Invented in Montreal in 2014, Generative Adversarial Networks (GANs) give AI the ability to generate new content, from images to written text to music. Originally, GANs simply learned from samples, such as images of people, and then generated their own realistic representations.