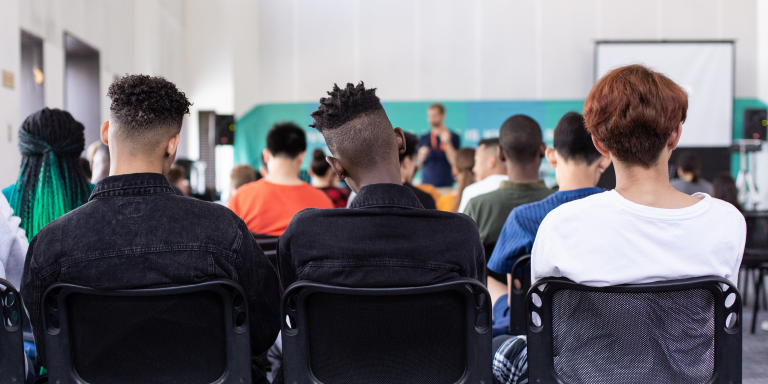 The Minister of Education recalled the difficulty encountered by the education services during the pandemic to know the number of positive cases in the classes, absenteeism … He further explained:

“None of [this] information in education was readily available and quickly accessible. Every time, it was an obstacle course in education and we had to manually collect, through surveys, questionnaires, accountability, all this information.”

“It was an old way of collecting data that slowed us down. Our schools, our school service centers, are gold mines of information and data. We had to be able to drill down to the right place and extract it.”

A rather promising use of AI

This AI tool is already being tested in some Canadian HSAs to predict which teens are most likely to drop out. It is based on school results, but also on absences, behavioral problems… Principals receive a list of these students every month, and educational teams can react quickly to help these young people. Daniel Bellemare, executive director of the Centre de services scolaires au Cœur-des-Vallées, in the Outaouais region, where the experiment has been taking place for about two years, said:

“It’s a really incredible tool, it allows us to detect students who are in a grey area and were falling into a crack before.”

“This gives the school team, who no longer have to do the data analysis on their own with what they have, more time to spend with their students.”

At the CSS au Cœur-des-Vallées in the Outaouais region and at the CSS du Val-des-Cerfs in the Eastern Townships, the use of digital intelligence has made it possible to identify, in more than 90% of cases, the students most at risk of dropping out of school as soon as they enter Secondary 1. The Minister of Education stated:

“We’re not coming to make the work of school teams any heavier,” Minister Roberge made a point of clarifying. We are not telling teachers what to do. We’re not here to interfere with classroom pedagogy. We are coming to lighten the workload of school teams, to reduce the bureaucracy in reporting by extracting data and sharing information.”

The data analyzed will be that of absenteeism, school success, but will also concern human resources needs and infrastructure maintenance operations. All data will be anonymized and translated into dashboards. Minister Eric Caire said:

“The Quebec government must be cyberparanoid. Given the fact that we are working with massive data, I want to reassure Quebecers that all measures will be taken to ensure the cybersecurity of this information.”

“This first major effort in artificial intelligence of the Quebec government” according to Eric Caire is carried out with the help of the Institut québécois d’intelligence artificielle (MILA), the Institut de valorisation des données (IVADO), the Observatoire international sur les impacts sociétaux de l’intelligence artificielle et du numérique (OBVIA) as well as GRICS, a company specializing in information technology in education.

A mixed reception from the educational team

Teachers said they are aware of the need to make the digital shift, but they want to ensure that it is done properly and that human judgment is taken into account. Éric Gingras, president of the CSQ teachers’ union, said:

“A model, no matter how effective, will always remain simply a model. Someone will always be needed at the end of the day to make a professional judgment. These guides will not be able to account for the entirety of a student’s journey, his or her strengths and weaknesses, and his or her evolution, as only educational personnel can.”