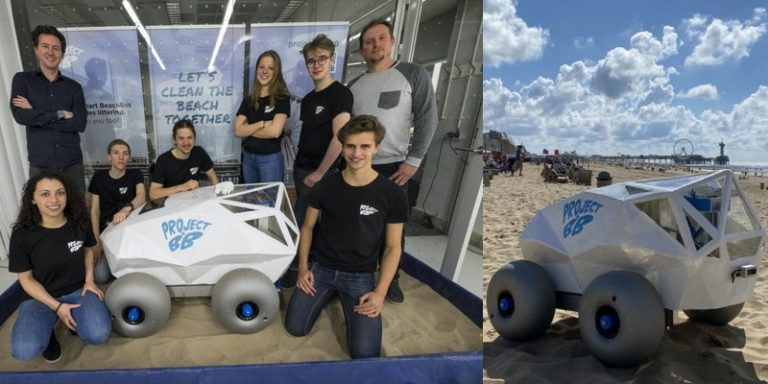 In August, many people go to the beach to spend a good holiday. The salt water, the sea air, the fine sand… in which we can unfortunately find cigarette butts thrown on the ground, which is far from being beneficial for our planet. To try to put an end to this pollution, two engineers have designed a robot equipped with AI that locates cigarette butts to pick them up and thus, clean the beaches.

It’s no secret that throwing cigarette butts on the ground pollutes our planet. A single cigarette butt can pollute up to 500 litres of water and takes almost twelve years to decompose, a real disaster when you know how important it is to take care of your environment. There are pocket ashtrays that you can simply throw away in the garbage, but some smokers don’t want to be bothered with this task and don’t hesitate to hide their cigarette butts in the sand, well buried, so that nobody can see them.

In order to fight against this plague and to recover a maximum of cigarette butts on the beaches, Edwin Bos and Martijn Lukaart, Dutch engineers and researchers, but also co-founders of TechTics, have created BeachBot: an intelligent robot capable of detecting cigarette butts. The two collaborators have taken up the concept of the street cleaners already in place in the Finnish capital, Helsinki.

BeachBot, a robot that uses visual recognition to operate

BeachBot is 80 centimetres long and has the ability to move completely autonomously. It has two cameras located at the front and rear. Under the robot, there are two arms that can pick up cigarette butts. This waste will be identified thanks to AI, and more precisely thanks to visual recognition and image detection algorithms. It collects this waste and then stores it in its integrated trash can.

TechTics leverages Microsoft Trove, which provides developers with image banks shared by caring users. So far, 200 photos have been collected to enable the machine to recognize butts in different shapes and states of decomposition, but the firm plans to collect 2,000 to make the robot as good as possible.

Currently, the prototype has an autonomy of one hour, but the TechTics team promises that in the future, their invention will work longer. The goal is for the robot to be able to find all types of cigarette butts: those buried in the sand, those that are crushed, those that are worn out, those that are cut in half, in three, etc.